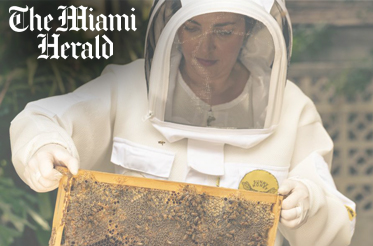 She Grew Up In A Family of Romanian Beekeepers

Growing up in Communist Romania, Mihaela Gutman and her family lacked many basics.

Honey, however, was abundant.

“Honey was our dessert, our medicine, our everything,” said Gutman, who now lives in South Beach. “We didn’t have sugar; we didn’t have anything. But we had honey. I grew up fascinated with bees.”

Today, she is a nascent entrepreneur, having recently launched Sunny Honey Miami with her husband, Jorge Gutman, a Miami Beach contractor.

The company sells seven types of honey. But this is not the honey you squeeze out of a plastic bear. Imported from Canada, the honey is creamed and bottled in Florida, giving it a texture similar to crème brulée. The honey is flavored with vanilla, matcha, cacao, coconut, key lime or lavender for as long as two weeks. The company also sells a plain creamed honey, Gutman’s favorite.

It’s not cheap — $22.99 for a 12-ounce jar, sold on Sunny Honey’s website and at My Deli Market on Brickell Bay Drive. They are also marketing it at specialty food shows.

They’ve sold about $50,000 since launching three months ago, says Jorge Gutman, adding they have seven employees.

“What they have done is a change in the industry,” said Joaquin Mantovani, a honey importer in Florida who advises them.

Gutman grew up in Romania in a family of beekeepers. When she was young, Romania was ruled by the dictator Nicolae Ceausescu, whose 22-year Communist rule was marked by killings of thousands of Romanians, drastic shortages of food and water and government corruption, including Ceausescu appointing his wife Elena as first deputy prime minister.

On Dec. 25, 1989 — after he and his wife were convicted of genocide in a military trial and sentenced to death — they were executed by firing squad. The northern part of Romania borders Ukraine.

Growing up, Gutman was told women didn’t work, that their calling was in the home.

That changed when Gutman left Romania for the first time in 1994. At age 20, she was selected to represent Romania at the Miss Universe pageant in the Philippines. Seeing life outside of a Communist country opened her eyes.

“I decided I was going to travel the whole world,” said Gutman, now 47.

Baker in Turks and Caicos

One of her stops was the Turks and Caicos, an archipelago southeast of the Bahamas in the Atlantic Ocean. In 2011, she was working in a bakery there when Jorge Gutman, vacationing in the islands, walked in.

“She walked out of the kitchen and I fell in love,” he said. “For me, it was love at first sight.”

Two years later, she moved to South Beach and the couple married. They bought a beehive for the backyard of their South Beach home, eventually leading them to create Sunny Honey. Gutman works full time at the business while her husband continues in real estate.

Gutman tested the recipes over three years, trying different honeys and infusing them with different flavors.

”What they have done is put a white gold on the shelf,” Mantovani said, noting they use a rare white honey.

White honey, unlike amber honey, has a milky, custard-like color. Mantovani says the lighter the honey, the sweeter it is.

“If you try theirs and then you try a Publix honey, you will taste the difference. It’s sweeter and not bitter.”

Our honey is pure and raw, coming straight from the honeycomb. Raw honey doesn’t contain any ingredients other than honey from the beehive. Our infused honey only uses the highest quality pure ingredients that are never touched or altered by chemicals. The flavor profiles of each infusion are inspired by our international travels and years in the restaurant industry.  LEARN MORE

We use cookies on our website to give you the most relevant experience by remembering your preferences and repeat visits. By clicking “Accept All”, you consent to the use of ALL the cookies. However, you may visit "Cookie Settings" to provide a controlled consent.
Cookie SettingsAccept All
Manage consent

This website uses cookies to improve your experience while you navigate through the website. Out of these, the cookies that are categorized as necessary are stored on your browser as they are essential for the working of basic functionalities of the website. We also use third-party cookies that help us analyze and understand how you use this website. These cookies will be stored in your browser only with your consent. You also have the option to opt-out of these cookies. But opting out of some of these cookies may affect your browsing experience.
Necessary Always Enabled
Necessary cookies are absolutely essential for the website to function properly. These cookies ensure basic functionalities and security features of the website, anonymously.
Functional
Functional cookies help to perform certain functionalities like sharing the content of the website on social media platforms, collect feedbacks, and other third-party features.
Performance
Performance cookies are used to understand and analyze the key performance indexes of the website which helps in delivering a better user experience for the visitors.
Analytics
Analytical cookies are used to understand how visitors interact with the website. These cookies help provide information on metrics the number of visitors, bounce rate, traffic source, etc.
Advertisement
Advertisement cookies are used to provide visitors with relevant ads and marketing campaigns. These cookies track visitors across websites and collect information to provide customized ads.
Others
Other uncategorized cookies are those that are being analyzed and have not been classified into a category as yet.
SAVE & ACCEPT